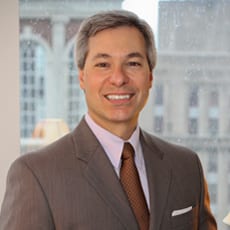 Tom Sansone has practiced in the civil litigation arena in Connecticut for over 35 years, representing individuals and companies in a wide variety of business-related and personal disputes. He practices in various fields of civil litigation, including commercial, construction and insolvency litigation. He has tried more than 90 cases to conclusion in Connecticut Superior Court, United States District Court and United States Bankruptcy Court and has argued before both the Connecticut Supreme and Appellate Courts. Much of his trial work involves complex banking issues, including lender liability cases, contested foreclosure/collection matters and representation of creditors in adversary bankruptcy proceedings.

While in law school, Tom completed an internship with the Commonwealth of Massachusetts Commission Against Discrimination, working on behalf of victims of employment discrimination. He also volunteered for Greater Boston Legal Services as a student attorney, representing indigent persons in a variety of matters, including landlord/tenant disputes and Social Security Administration appeals.

Thank you for representing us in our litigation. You were able to quickly resolve an intractable problem that was a long time in the making. I appreciate your pragmatic and forceful approach to the litigation and the resulting negotiations.

I wish to express my positive experience working with Tom. First, he was a pleasure to work with. Second, and more importantly, he provided excellent legal services. He was knowledgeable and responsive to the complicated legal and factual issues raised.

All successful entrepreneurs/businessmen need two things: a good legal guide on the right side and a good banker on the left side. I can say unequivocally that we have found that legal support with Tom by our side.