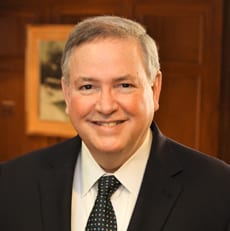 Jim Robertson is a member of the firm’s litigation practice, which was named a “highly recommended” Connecticut litigation team in Benchmark Litigation’s Guide to Leading Business Litigation Firms and Attorneys. Jim has regularly been recognized as a preeminent litigator in Benchmark Litigation, Chambers USA, Superlawyers® (“Top 50” and “Top 10”), and Best Lawyers in America. He is rated AV- “Preeminent” by Martindale Hubbell and 9.7 “Superb” by Avvo. He is a Fellow of the American College of Trial Lawyers and of the American Board of Trial Advocates (“ABOTA”).

Jim has been first chair in over 50 jury trials and 100 court trials in state and federal courts. He serves as national coordinating counsel of product liability claims for numerous manufacturers, and is frequently selected as a special master, arbitrator and mediator. Jim has served as a Superior Court judge and as the firm’s Managing Partner. He is an ordained Congregational Minister and serves as the Associate Minister of the Watertown Congregational Church.

James Robertson is described by market observers as a terrific lawyer.” His practice encompasses a broad range of matters, such as government investigations, environmental litigation and product liability disputes.”

Mental Health in the Workplace: The Current State of the Law and What's on the Horizon