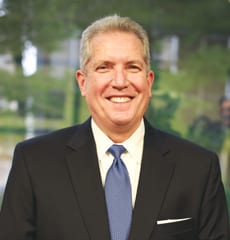 Steve is an experienced neutral arbitrator trained by the American Arbitration Association and is regularly selected to decide complex commercial & construction disputes. He is a member of the American Arbitration Association’s panels for Large & Complex Commercial, and Construction Cases. Steve is also a neutral mediator trained (40 hours) at Quinnipiac University Law School Center for Dispute Resolution. Since 1996, Steve has served by appointment as a Special Master mediating civil cases each month in the State Superior Court in Stamford.

Steve has a long history of leadership in the state and local bar, including his election as a Board Member (1993-2003) and as President (2003-2004) of the Fairfield County Bar Association. Steve is active in the Connecticut Bar Association as an elected member of its Board of Governors, and as a member of the Professional Ethics Committee, and Profession Discipline Committee. Steve was a member of the CBA Task Force on the Unauthorized Practice of Law.

Since his admission, Steve has maintained an active trial practice representing clients in commercial & construction disputes in State and Federal Courts, and in arbitration, mediation, and administrative hearings before Boards, Committees, and Commissions throughout Connecticut.

In 2012, Steve was appointed to a four-year term on the Connecticut Judicial Compensation Commission which evaluates the adequacy and determines the sufficiency of compensation paid to State Court judges. From 2012 until 2016, he served on the Connecticut Judicial Selection Commission which investigates and recommends lawyers for appointment as judges and evaluates incumbent judges for elevation (to the Appellate Court and the Supreme Court) and for reappointment; Steve was Vice-Chair when his term on the Commission ended in Spring 2016.

The HEMP and CBD Industries in Connecticut