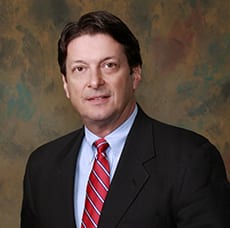 Kevin M. Greco has been a trial attorney since 1989 practicing in the state and federal courts of Connecticut representing individuals and families who have suffered serious or fatal injuries due to the carelessness or negligence of others. Typically, these cases include wrongful death, auto and truck collisions, motorcycle accidents, pedestrian accidents, drowning incidents, trip and falls, defective premises, defective products, medical and dental malpractice, and workplace or construction accidents. He has also represented Plaintiffs in a variety of class action lawsuits.

In addition to personal injury law, Attorney Greco also represents workers who have been injured on the job in all workers compensation districts in the State of Connecticut.

While continuing to focus on personal injuries and wrongful death, Attorney Greco also handles the legal problems encountered by individual police officers in the performance of their duties. His representation of police officers and their labor unions has included the negotiation of the unions’ collective bargaining agreements with major municipalities in Fairfield County and the efforts to enforce the contract provisions. Attorney Greco has also represented clients involving public sector employment issues.

Thanks to you and your staff for helping me through a very difficult time & securing me an amazing settlement. Your professionalism allowed me to focus on healing rather than stressing over legal matters. Thanks for everything.

Mental Health in the Workplace: The Current State of the Law and What's on the Horizon