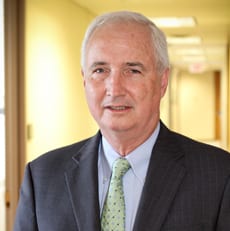 Chris Rooney is a litigator (criminal and civil) whose practice focuses on investigations of environmental, fraud, antitrust, investment funds and False Claims Act violations, particularly by state and federal government. He has also represented partners in various real estate and hedge funds who have sued each other.

Connecticut Light and Power Company v. R.R. Donnelley & Sons Company (2017) – Suit brought on behalf of CL&P against printing company after discovery of a bypass of electric meter which enabled company to obtain electricity for 14 years without paying for most of it.  Settled on confidential terms.

The Writer’s Workshop Inc. v. John C. Elwell Jr., et al.  (2017) – Defended foreclosure action on the basis that mortgage signed by my client was obtained by improper threats to report her spouse as a criminal if she did not sign. Court ruled that the threats by attorney and his client amounted to duress and voided the mortgage.

CTDEP v. Pilot (2010) – Defense of suit by Connecticut Attorney General seeking $56 million in fines related to what A.G. referred to as the largest underground release of diesel fuel in Connecticut history. After cross examinations of its lead witnesses, the DEP case collapsed and it settled for $75,000.

Brennan v. Brennan Associates (2012) – In suit brought by one partner against his three other partners to take control of a regional shopping center, we successfully defended the three partners and obtained a judgment dissociating the plaintiff. Affirmed by Supreme Court. Second trial as to valuation of assets also decided by Supreme court in my clients’ favor.